Review in the Chronicle of Higher Education 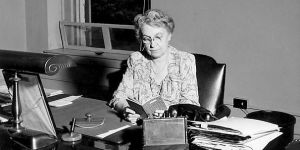 She looks harmless enough. A photograph shows an elderly woman at a desk in what appears to be paisley and pearls. Her hair is in a matronly updo, her glasses—pince-nez?—frame her gaze downward as she studies a small booklet. It isn’t immediately obvious it’s a passport.

Mrs. Ruth Bielaski Shipley was chief of the U.S. State Department’s Passport Office from 1928 to 1955 after having started as a clerk in 1914. Her power is difficult to overstate. “A wonderful ogre,” she was called by one appreciative boss, President Franklin D. Roosevelt. While much of her bureau’s business was conducted without issue, she single-handedly delayed, thwarted, or otherwise constrained the travel plans of thousands of Americans. Among them were household names—Paul Robeson, Linus Pauling, Arthur Miller, Lillian Hellman—whose battles with Mrs. Shipley warrant a page or three in their biographies.

Others were unknowns. During the cold war, what many of her targets had in common were their politics. If you were a Communist Party member, or a fellow traveler, or just too pink for the lady, you could be refused a passport. But there was a vaguer category of those who might offend. As Readers’ Digest put it in a 1951 profile of Mrs. Shipley: “No American can go abroad without her authorization. She decides whether the applicant is entitled to a passport and also whether he would be a hazard to Uncle Sam’s security or create prejudice against the United States by unbecoming conduct.” On Mrs. Shipley’s watch, embarrassment to the United States could be grounds for grounding.

Despite her once modest fame, Mrs. Shipley has long been lost to history. But readers can newly make her acquaintance in a book in which “Red Scare” meets “war on terror” and neither appears to pass constitutional muster.

For Jeffrey Kahn, author of Mrs. Shipley’s Ghost: The Right to Travel and Terrorist Watch Lists (University of Michigan Press), “this extraordinary civil servant is the intellectual ancestor of the No Fly List,” a shadowy roster that has been in effect and expanding since the attacks of September 11, 2001.

The scholar, an associate professor of law at Southern Methodist University, came to his topic in 2006 by happenstance, reading The New York Times. The paper reported that after five months’ waiting, Muhammad Ismail, a Pakistani-born man and naturalized U.S. citizen, and his American-born son Jaber had been permitted to return home to California after an extended stay in Pakistan. They had been denied permission to fly home unless they submitted to an FBI interrogation. There was no arrest, no charge, no explanation. In Hong Kong, after the first leg of their original return flight, three members of the Ismail family were given boarding passes while the two men were refused. Eventually they received legal help from the ACLU and that, along with media attention, seems to have done the trick, though again without clear explanation.

Kahn, in a phone interview, says reading about the case made him reflect on a class he was then preparing in constitutional law. “One of the core ideas that I would be teaching my students would be there was something special about being a United States citizen.” He says he was struck that “citizenship could be so ephemeral and could be so quickly tossed to one side to do abroad what could never be done inside the United States, essentially threatening one’s freedom of movement if one doesn’t cooperate with authorities.”

He began researching a law-review article on international travel and the Constitution, and it was then he encountered Mrs. Shipley.

By the time she retired, Mrs. Shipley had amassed data on 12 million Americans in an impressive—and, remember, noncomputerized—system of file cabinets. Today, Kahn writes, her spirit has been digitized, flowing through “computers and watchlists with a power greater than the real Mrs. Shipley could possibly have imagined.” Digitizing Mrs. Shipley “disperses her ghost throughout the machine. She is omnipresent but untouchable.”

In Mrs. Shipley’s day, if you were denied a passport, there was indeed a person at the end of that decision. You could make your case, attempt to bargain, and it might even work. Lillian Hellman, after previous run-ins with Mrs. Shipley, decided to speak with the doyenne herself. The negotiation resulted in the renewal of a limited passport.

Today an American citizen on the No Fly List faces a much murkier situation. “It’s a journey down the rabbit hole,” Kahn writes. Complicating matters is the fact that “no single agency now takes responsibility for the decision to ground a traveler.” The starting point for protest is DHS TRIP (the Department of Homeland Security’s Traveler Redress Inquiry Program). There is no office to visit, says Kahn, neither does its Web page “indicate who will review the inquiry, by what standards, or even which agency will make the relevant decision.” The process, which he compares to a “shell game,” becomes even more complicated if you decide to pursue legal action. If, say, you decide to sue the TSA (Transportation Security Administration), that agency will argue it is simply implementing a directive from the TSC (Terrorist Screening Center). If you turn then to sue the TSC, it will say it has nothing to do with how the information is used; it just supplies the data. The TSC, part of the FBI, generates the No Fly List as one product of a vastly larger Terrorist Screening Database.

Ably navigating an alphabet soup of agencies and watchlists, Kahn draws on interviews with a feisty set of officials, including Timothy Healy, until this spring the head of the TSC, and Michael Jackson, formerly deputy secretary at the Department of Homeland Security. “Ask yourself a prudential question,” Jackson urges. “Would you rather those people have the authority to err on the side of caution?”

Numbers fluctuate quite a bit on the No Fly List. In early 2011, Healy said it contained more than 10,000 people, including around 1,000 U.S. citizens. In early 2012, a report by the Associated Press said the figure had doubled to 21,000, with citizens declining to 500. It’s startling to realize that the forerunner to the No Fly List, Kahn says, was a Security Directive that on September 10, 2001, named 12 individuals who had been deemed a danger to civil aviation, none of them American citizens.

Central to Kahn’s argument is how the No Fly List has succumbed “to the inevitable pressures of ‘mission creep'” made even more worrisome by a lack of judicial oversight. What started as a list of those who might endanger airplanes now includes the much vaguer language of a threat to national security.

Would Kahn prefer the list to be abolished? What of the argument that it is better to correct any abuses and mistakes while retaining the basic apparatus? In response, the author points out in the interview that Mrs. Shipley’s political litmus test for passports was eventually discredited as the courts “started to shine the light of due process on her system.” Yet with that correction, the world did not end, the State Department continued to issue passports and keep tabs on travelers. “So my argument is, we cannot use these lists the way we’re using them now. We cannot use them as tools of investigation. We cannot use them to summarily decide that someone who has committed no crime or has been accused of any crime is going to get treated as a citizen of lesser status.”